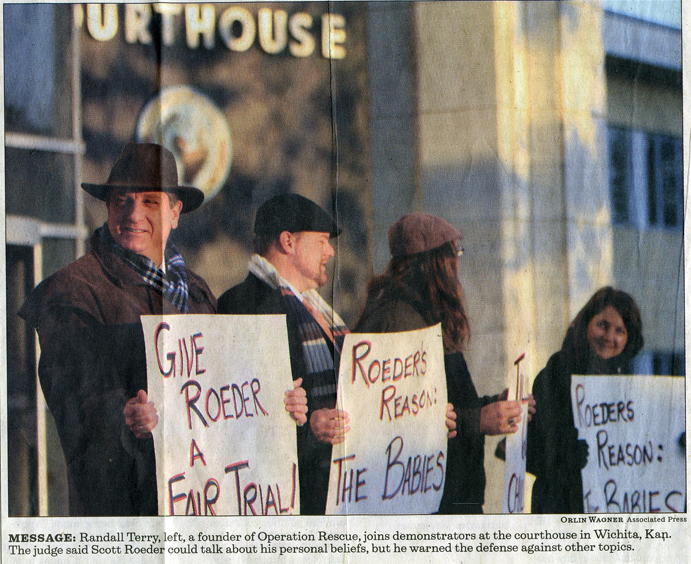 The Center For Bio-Ethical Reform (CBR) today condemned Randall Terry’s support for violence against abortion providers. CBR also applauded the conviction of Scott Roeder for the murder of abortionist George Tiller and condemned the abortion industry for slaughtering children on a scale which dwarfs every atrocity in all of human history.

The Associated Press reported a story on January 31, 2010 headlined “Conviction angers anti-abortion militants” which quotes Mr. Terry as saying that “… more violence is inevitable” and that “’The blood of these babies slain by Tiller is crying for vengeance’….”

The Los Angeles Times, in a story titled,“Killer of abortion doctor eager to speak, friend says,” January 28, 2010, reports that Randall Terry has now associated himself with the most violent elements of anti-abortion anarchy:

The trial also has drawn a who’s who of antiabortion extremists, including Randall Terry, a founder of Operation Rescue. Many of the abortion foes are connected with the Army of God, a group that urges violence against doctors and clinics. Michael Bray, who was convicted of bombing the Washington offices of the National Abortion Federation and the ACLU in 1984 is here.

Some anti-abortion activists, who attended the trial, including David Leach from Iowa and Michael Bray from Ohio, signed a petition arguing Roeder should be able to use a justifiable homicide defense. Randall Terry, founder of Operation Rescue, was also in court, and he said he didn’t think that justice was served since the jury didn’t get to consider Roeder’s motive of preventing abortion.

‘And it showed to me that they never got a chance to get inside of Scott Roeder’s head. The babies who died at Tiller’s hand deserved their day in court, and it should have been this trial and it wasn’t,’ Terry said.

CBR categorically condemns Mr. Terry’s suggestion that any motive could have justified Mr. Roeder’s murder of “Dr.” Tiller. That suggestion was repeated visually by Mr. Terry and others who held matching signs which argued the need to “GIVE RODER A FAIR TRIAL” and asserted that a fair trial could only be had by allowing the jury to consider “RODER’S REASON: THE BABIES.”

CBR also condemns the notion that the violence of “vengeance” is an appropriate response to the violence of abortion. If it is morally justifiable for anti-abortion activists to kill abortionists, that same “right” could just as easily be claimed by wild-eyed consumer advocates who could begin to kill corporate officials who preside over the production of goods and services which they know or should have known will endanger public safety. The same attacks could be launched by radical environmentalists who think “climate change” is homicide; or animal rights activists who think “meat” is murder.

The list of grievances is endless and our pluralistic society would quickly be plunged into interminable chaos. The rule of law is fragile and hard-won and it would be swept away in a wave of perpetual holy wars. We could find ourselves living in the hellish equivalent of Gaza or Mogadishu. Every disgruntled sociopath would get a gun and once the shooting starts, it would be very difficult to stop. People would soon be shooting without any clear recollection of why they are even killing.

Why, then, couldn’t advocates of abortion rights claim the reciprocal right to kill anti-abortion activists? And as CBR has predicted for years, that is exactly what recently happened when a supporter of legal abortion shot and killed CBR volunteer James Pullion for publicly displaying abortion photos.

CBR opposes the death penalty so we were encouraged by a story at KAKE.com, headlined “Roeder Charged With Murder In Tiller’s Killing,” June 2, 2009. It said, “… District Attorney Nola Foulston told reporters the case does not qualify as a death penalty case.”

But neither do we want Mr. Roeder to ever again walk free. KansasCity.com, reported a story headlined “Roeder found guilty of murdering abortion doctor,” on January 29, 2010, which revealed “The prosecution said it would pursue a ‘hard 50’ sentence, which means 50 years in prison with no chance of parole.” Mr. Roeder is 51-years-old. We urge people of faith to pray that he repents of the terrible damage he has done the cause of life.