Abortion rights advocates often challenge the viability of adoption as a solution to the problem of mothers who are unable or unwilling to parent their children after birth. Because many people are unacquainted with the information on adoption given below, they are prone to believe the doomsayers who predict millions of unwanted children wreaking havoc on society if abortion is banned. A quick look at some adoption statistics gives one a different sense of what an abortion-free future might look like. 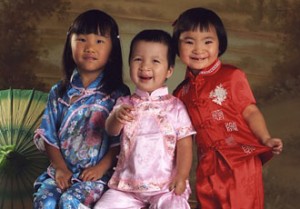 CBR Director and Deputy Director (husband and wife) fight abortion through adoption. Our wonderful little daughters, Annie, Amy and Alice Cunningham, were abandoned at birth in China because they had cleft lip, cleft palate and other developmental defects. They are unbelievably smart and funny and very pro-life.

Loving Others’ Rejects – An elderly Chinese couple can always find room in their shack, and their hearts, for another castaway child — 42 of them in 17 years (Los Angeles Times)

The following adoption facts were obtained from the National Council for Adoption (https://www.adoptioncouncil.org/)