The Center For Bio-Ethical Reform (CBR) condemns the journalistic hypocrisy of the Associated Press (AP).  The “disturbing” photo of a U.S. Marine dying in combat is not deemed too “disturbing“ for publication because the AP believes it is in the public interest to “convey the grimness of war and the sacrifice of the young men and women fighting in it.”  The AP, however, has steadfastly refused to publish similarly disturbing photos of abortion.  They apparently believe that it is in the public interest to suppress images depicting the “grimness “ of abortion and the “sacrifices” being made by the young boys and girls who are being slaughtered for the convenience of their parents.  The AP publishes bloody photos of the war against the Taliban because they are anti-war.  They censor bloody photos of the war against the unborn because they are pro-abortion.  That is why they will publish this: 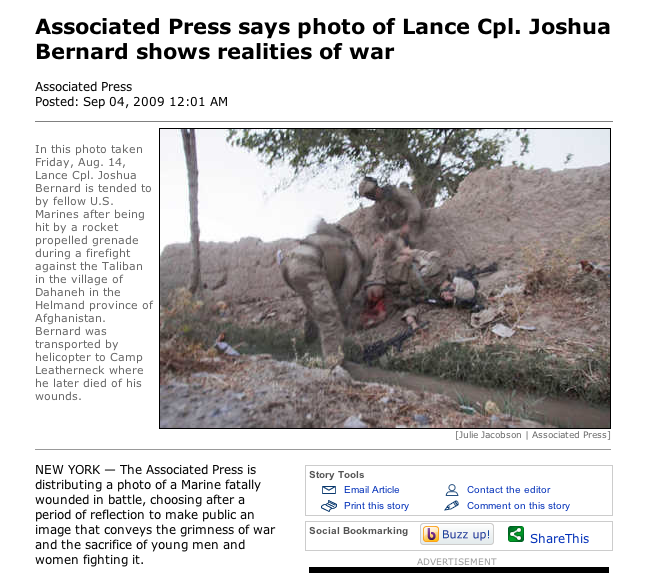 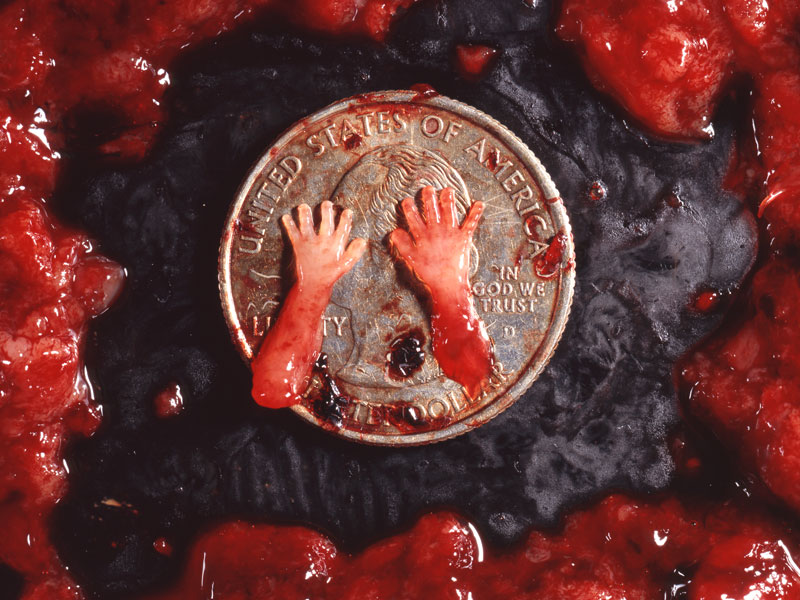 Here is another related story on which I comment below:

The US Defence Department may disagree, but the images speak for themselves

Here are key phrases from this article on the photo of our Marine dying on the battlefield in Afghanistan which I believe have strong abortion relevance are as follows:

“Defenders of the photograph accused Mr. Gates of attempting to sanitize the conflict, by concealing the grim reality of the war at a critical political juncture.” Our adversaries constantly strive to sanitize abortion.

“The photograph violates one of the oldest taboos, by intruding into the sacred privacy associated with the moment of death. It was published in defiance of the wishes of the dead man’s family and it raises uncomfortable questions about the dividing line between voyeurism and reportage.”  We are constantly being accused of violating privacy rights with our abortion photos privacy means nothing to anti-war activists.

“ … [T]heir [photos’] power to shape our collective consciousness is immense. Knowing this, the authorities that wage war have always sought to control the public image of warfare.”  Image control is the factor which will also determine the outcome of the abortion wars.

“This desire to control the imagery of war reflects the capacity of photography to convey the blunt truth about conflict in a way that no other art form, including the written word, can achieve.”  This is why the political left loves shocking photos when they can be used to make the public anti-war but hates them when we use them to make the public anti-abortion.

“Robert Capa’s photograph The Fallen Soldier similarly evokes the Spanish Civil War: it is irrelevant who the soldier was, and where he had fallen; nor does it matter that the photograph may have been faked, for its power lies in not in the literal evidence it offers, but the greater meaning it conveys.”  We are constantly being accused of “faking” our photos but this writer says the symbolic significance of a faked photo can redeem it despite the fact that it literally untrue.

“The picture’s power lies less in its shock value than its demand for a response:”  The element of our photos which makes everyone on all sides of this issue squirm is that these pictures demand a response.

“ … [D]aily, dirty, arbitrary violence.”  It is the terrible, random, arbitrariness of abortion which makes its violence so “dirty.”

“[H]is [picture’s] influence on history is likely to be profound and lasting.”  We are also using pictures to influence history in a profound an enduring way (as regards public opinion which dictates public policy).

OF COURSE, NONE OF THIS MATTERS TO A PRO-LIFE MOVEMENT IN WHICH STUPIDITY AND COWARDOUS ABOUND.  IF ONLY OUR PRO-LIFE FRIENDS WERE AS BRIGHT AND BOLD AS THE ANTI-WAR CROWD.