Debate on use of graphic abortion pictures 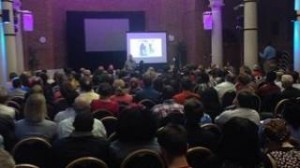 Published on October 4, 2013 by Christian Concern:

Two of the most prominent figures in the abortion debate went head to head last night in London over the issue of whether it is right to use graphic abortion imagery outside UK abortion clinics.

The motion debated was: “This House believes that it is morally wrong for groups to approach women and display abortion imagery outside facilities which provide abortion services.”

Ms Furedi acknowledged that the pictures are “disturbing” and called the displays outside abortion clinics “inhumane” and “reprehensible”, believing them to be morally wrong.

Furedi also likened the pictures to pornography, saying that they take things “out of context”.

Taking issue with the displays being called “protests”, Mr Cunningham said that when a person holds up a picture of an abortion, “abortion protests itself”.

In response to the claim that the pictures are “pornographic”, Cunningham said that whereas pornography dehumanises, abortion imagery underlines the humanity of the unborn.

The “value” of the unborn child was also discussed, with Furedi saying that it is relative depending on whether the woman wants to continue with her pregnancy or not.

The issue of displaying graphic pictures of aborted babies outside abortion clinics has become an important point of discussion in recent years.

Such images have been regularly displayed outside a BPAS clinic in Brighton over the past two years by CBR-UK / Abort 67, a group allied to the Center Bio-Ethical Reform.

In 2012, two leaders of the group, Andy Stephenson and Kathryn Attwood, were arrested and charged under Section 5(b) of the Public Order Act, for displaying graphic abortion images outside the clinic.

However, in September 2012, the pair were acquitted in Brighton Magistrate’s Court.

He also ruled that the police acted improperly when they confiscated abortion photo signs without authority to do so.

“This was an important debate to have. These pictures show the reality of abortion and this reality is disturbing. It’s a reality that needs to be exposed.

“The audience vote shows that many people agree. It’s not morally wrong to display pictures of abortion to those who will be directly affected by it.”

10 Reasons Why Abortion Is Wrong

Abortion – What You Need to Know