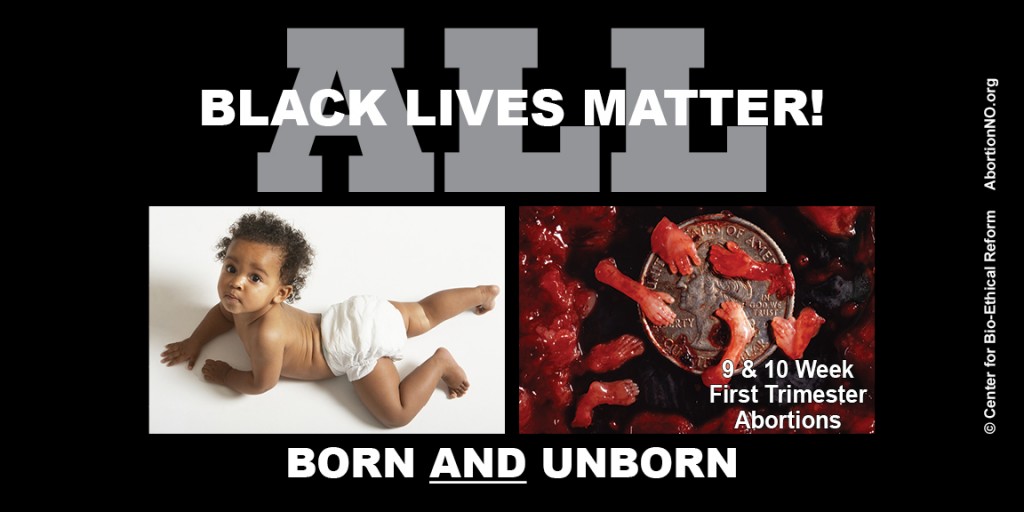 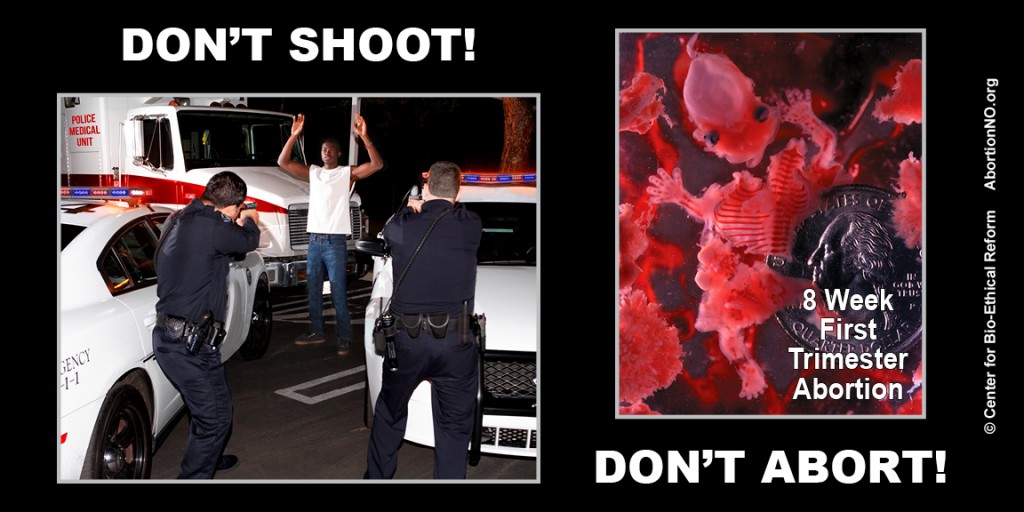 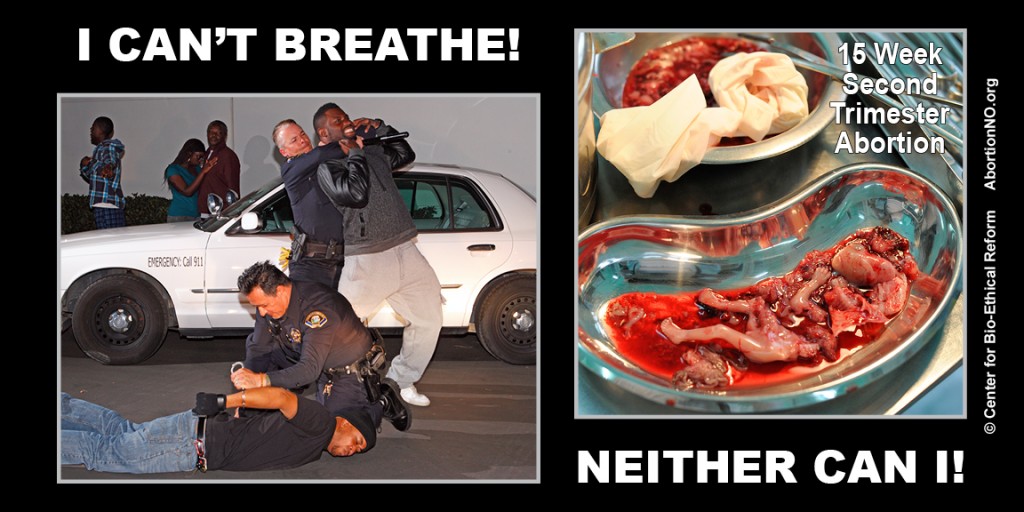 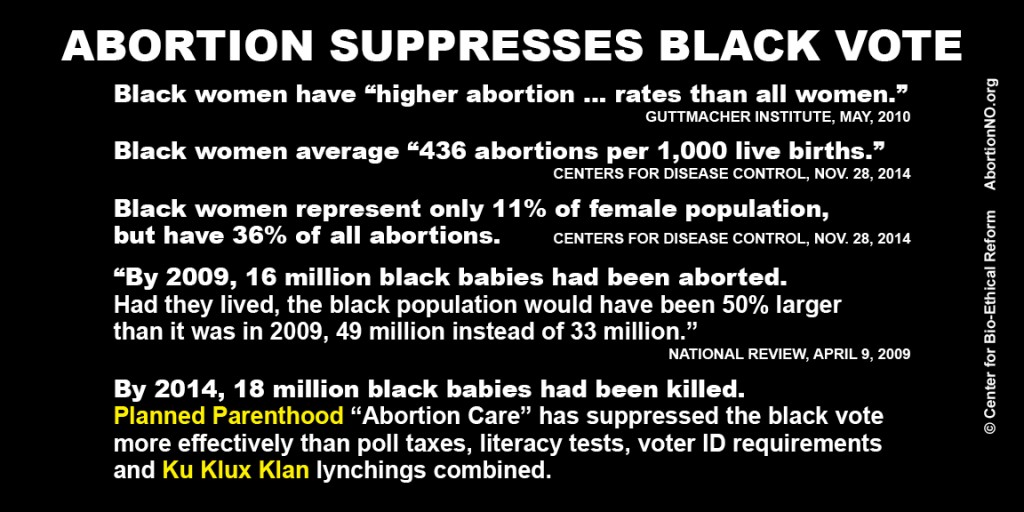 The Center for Bio-Ethical Reform (CBR) will introduce a provocative new sign display titled, “All Black Lives Matter,” Thursday, February 19, 2015, at the east front of the U.S. Capitol Building, Washington, D.C., at 11:00 a.m.

The first of the four disturbing signs comprising the new exhibit is themed, “All Black Lives Matter.” The second is “Don’t Shoot”; the third is “I Can’t Breathe”; and the fourth is “Abortion Suppresses the Black Vote.”

The exhibit was inspired by the tragic series of encounters between black suspects and white police officers in which the suspects lost their lives while being taken into custody. CBR believes the rule of law requires that police officers who employ excessive force should be prosecuted, convicted and punished appropriately. A young black man who raises his hands, shouting “Don’t shoot!” has a right to be apprehended unharmed. A young black man restrained in a police choke-hold should never die of asphyxiation after declaring, “I can’t breathe.” The evidence is often in dispute, but where proven beyond a reasonable doubt, police brutality is an intolerable outrage — especially if racially motivated. But where is the African-American community’s outrage over the hundreds of thousands of preborn black children butchered this year by the brutality of abortion?! Why isn’t the civil rights slogan “Don’t shoot” accompanied by the exhortation “Don’t abort”? When will African-American religious and political leaders acknowledge that aborted babies can’t breathe either? A police choke-hold can be a form of torture, and abortion also tortures babies to death. As Lila Rose recently established in another of her brilliant Live Action videos, the abortion industry lies to mothers about fetal pain.

The British Journal of Obstetrics and Gynecology reports in a review titled, “Fetal Pain: Implications for Research and Practice” (September 1999), that “… It is possible that the fetus can feel pain from 20 weeks and is caused distress from interventions as early as 15 or 16 weeks” (p 885). Brain structures activated by 16 weeks “… could be associated with unpleasant conscious experience” (p 885). Between 13 and 16 weeks is when “… it is likely that the fetus is aware of anything that is going on in its body …” (p 882). At eight weeks, “The fetus starts to make movements in response to being touched …” (p 882). More than 100,000 babies each year are aborted after 13 weeks (about 10% of the 1.1 million annual total). Approximately 17,000 are killed after 21 weeks (about 1.4% of the total).

A large percentage of these babies are African-American and many are dying slow, agonizing deaths. Those who aren’t torn to pieces suffer excruciating heart attacks after being injected with lethal doses of digoxin or potassium chloride, the same poisons being used to stop the hearts of death row inmates (See Boston.com, “Shots Assist in Aborting Fetuses,” August 10, 2007.)

The Orange County Register, January 24, 2015, published a story headlined “Justices to Review Drug for Execution,” which reported that the U.S. Supreme Court is examining the possibility that these drugs are causing inmates “intense” pain. The Los Angeles Times, on the same day, notes that an African-American inmate named Charles Warner recently exclaimed, “My body is on fire,” after receiving this lethal injection.

The National Association for the Advancement of Colored People is rightly dismayed to report (NAACP LDF Report “Death Row U.S.A.,” Summer 2013) that black inmates comprise 42% of death row prisoners. Why, then, do they strongly support the slaughter of the far greater numbers of African-American preborn children being executed with the same lethal injections?

NAACP leader Julian Bond recently equated abortion rights with racially-related civil rights (“NAACP Leader: Right to Abort is Same as Right to Eat at Lunch Counter,” LifeNews.com, August 6, 2014). The NAACP is so intellectually dishonest concerning black genocide that its board refuses to permit any debate on any proposed resolution related to abortion and won’t even allow the public reading of such proposals.

Michael Novak points out in National Review (“Notre Dame Disgrace,” April 9, 2009) that “… Black women make up 11% of the national female population but have more than 36% of all abortions …” He adds that “… Of the 47 million children aborted since 1973, some 16 million have been black. If those children had been allowed to live, the black population … [in 2009 would have been] about 50% larger than it … [was] – about 49 million instead of 33 million.” At that rate, by 2014, 18 million black babies had been killed. Planned Parenthood “abortion care” has suppressed the black vote more effectively than poll taxes, literacy tests, voter I.D. requirements and Ku Klux Klan lynchings combined.

These new signs are intended to stop this fratricidal atrocity, and CBR will collaborate with African-American anti-abortion leaders across the country to display them at middle schools, high schools, universities and churches with substantial black enrollment. Our African-American president has betrayed us. It is long past time for us to take matters into our own hands with an unavoidable witness against this great evil.

February is Black History Month. Black history in America is a story of kidnapping and forced labor and segregation. Those terrible injustices flourished only as long as they were allowed to remain invisible. The genius of the great abolitionists and civil rights activists to whom African-Americans owe their freedom was their courage in dramatizing black suffering, with iconic illustrations and photographs and films which pricked the collective conscience. Now it is the conscience of the black culture which must be pricked, and once again the agent of change will be disturbing pictures which make visible the injustice of black genocide. Bloody images of “Bloody Sunday” forced white people to face their responsibility for civil rights abuses. But every day is “Bloody Sunday” for hundreds of “unwanted” preborn African-American children. Today, however, it is the parents of those children who are shedding the innocent blood. Sickening pictures restored racial justice and we are certain that the same sort of imagery is the only path to the restoration of prenatal justice.