Another powerful story was sent to us today testifying to the power of using pictures of abortion in a loving way. Andy Stephenson, forwarded to Gregg Cunningham this story that he received from one of his fellow activists in the UK. We thank God for this story and pray for my like this. – DC

Andrew, even if we got a hundred of these a day, this one would be no less thrilling to us.  Every baby is obviously precious in the sight of God.  This is a great story, not least because it proves two important facts:  Anyone with a functioning conscience will chose life when you show them death; and pro-lifers who see the power of the pictures in action will never go back to words alone.

From: andrew stephenson To: Gregg Cunningham

Hi Gregg, I know you get this all the time but we got this good news today:

On our prayer vigil today at Wiston’s Abortuary we were able to engage  a young couple in conversation. The girl was 9 weeks pregnant and was booked in to have a suction Aspiration Abortion. Neither of them had told their parentsThey accepted the leaflet in which we explain the development of the baby showing that it is not just a clump of cells but a recognisable human being and has a heartbeat from 3 weeks.They said they had not been told this at the consultation session and had been lead to believe that the heart didn’t beat until 6 months of development. They had not been asked if they wanted to see the scan.I then showed them the sticker of an 8 week old aborted embryo. 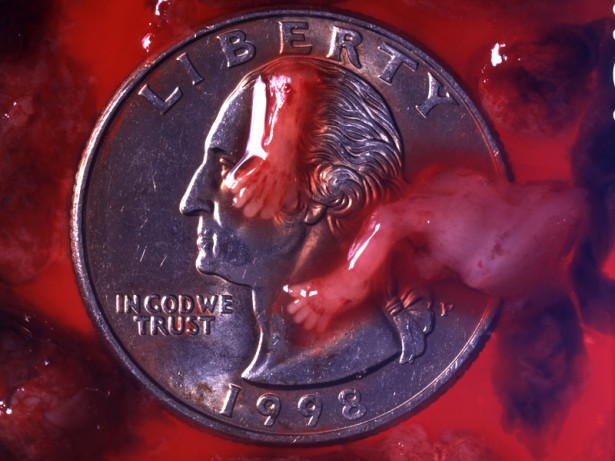 They were shocked and said they would go into Wistons and ask about the things we had discussed.A little later they came out and said that the staff had been uncaring and didn’t want to discuss the situation.They seemed very relieved to be coming out having made the decision not to go ahead with the abortion.The young man said that the picture of the aborted baby had made up his mind about not wanting his girlfriend to go through with it and they went off to tell their parents about the baby feeling confident that they would get support from them.This is the first time I have actually shown the picture of an aborted baby but I realise the power  in that. They both said they would go home and look at the Abort67 web site. I also managed to talk about faith and trusting God and they were pleased for me to pray with them. Please continue praying for this couple R and T.

To see more testimonies as evidence of the power of using CBR abortion imagery to change minds and save lives click here.