You may never have heard of CBR, but Barack Obama certainly has. A former Obama White House official has written a book in which he argues that CBR’s fierce protests against Obama’s 2009 commence address at Notre Dame set in motion a series of events which led to the failure of Hillary Clinton’s bid for the presidency.

By the start of his first term it was clear to Obama that the leaders of many of America’s largest “Catholic” universities were self-promoting careerists who longed to appropriate the celebrity of his historic presidency. He understood that they would gleefully permit him to use their schools as forums from which to make thinly-veiled political appeals to Catholic voters. By repeatedly speaking on the campuses of these influential universities, he could subtly suggest the Church’s blessing on his deceptive outreach to the Catholic electorate.

His message would be a quest for “common ground” on abortion and many of the purported “faithful” (including his adoring student fans) would be taken in by this scam. He would urge Catholic voters to overlook his belligerent promotion for radical abortion rights in exchange for his government programs which supposedly “reduced the need” for abortion.” But the premise of his offer was painfully false: People may want elective abortion, but no one needs it. And the programs he touted were merely more liberal Democrat “free stuff,” none of which has ever reduced the abortion rate even slightly.

The Obama official who rather unwittingly blew the whistle on this fraud is Michael Wear, and the title of his book is Reclaiming Hope: Lessons Learned In The Obama White House … Thomas Nelson (2017). Wear had proposed the use of soothing compromise rhetoric in a campaign he called “Notre Dame vision.” This flim-flam had already proven itself effective at deceiving marginal Catholics who (like many Evangelicals), lacked moral clarity.

But to Wear’s dismay, Obama over-reacted to the intensity and duration of our protests at Notre Dame, and decided that all outreach to pro-lifers was futile. He mistakenly concluded that he was being opposed by the entire pro-life movement, but our protests were actually being waged only by CBR and a handful of coworkers. In fact, major pro-life groups opposed our presence with abortion photos and Notre Dame’s pro-life student group insisted that we stay off campus. 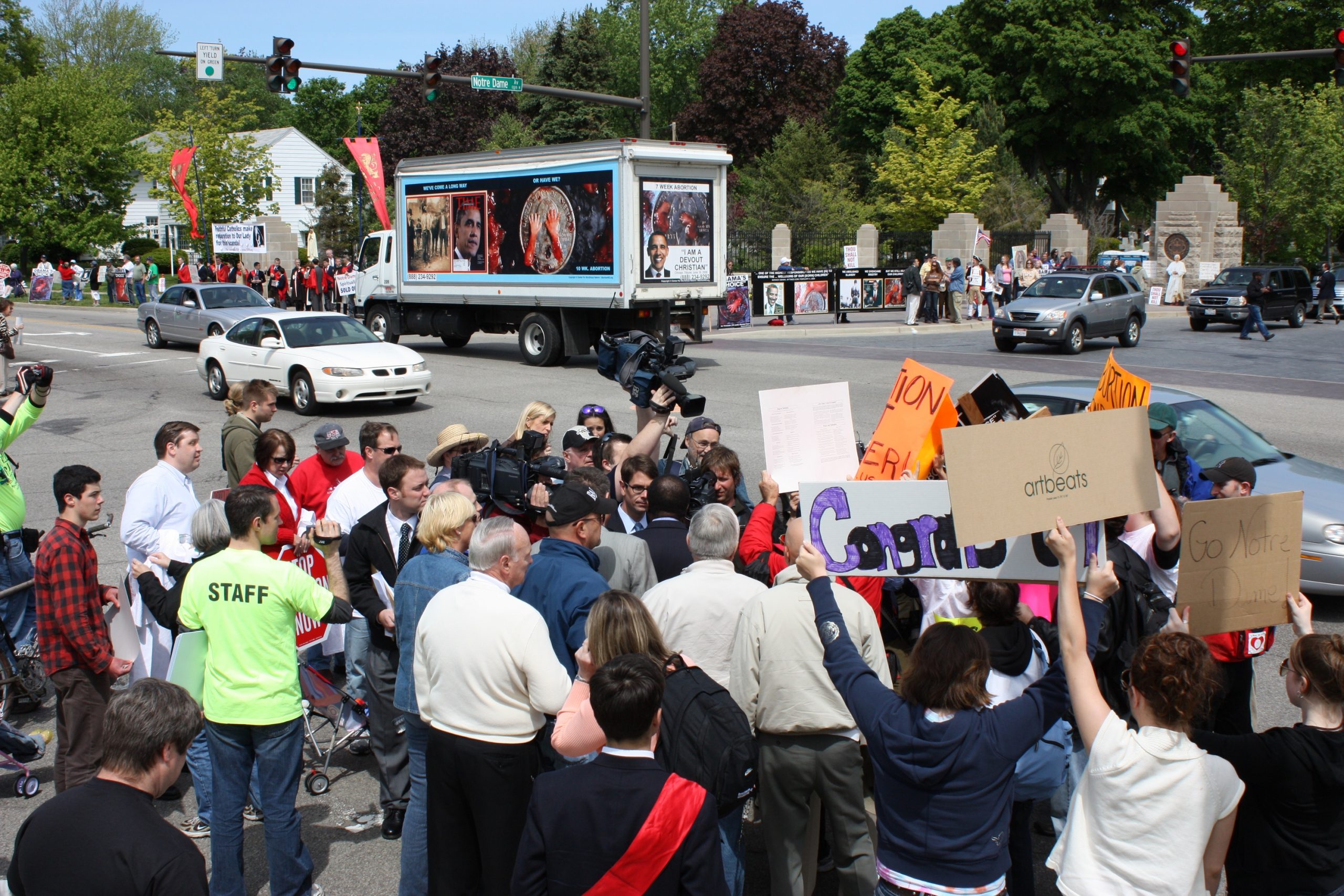 As a consequence of Obama’s misperception, the president (and Hillary Clinton) began to speak in the pro-abortion idiom which more accurately reflected the brutality of his (and her) true abortion sentiments.

After considering CBR’s Notre Dame protests, Wear told Atlantic magazine, December 16, 2016, that “I think Democrats felt like their outreach wouldn’t be rewarded. The president went to Notre Dame … and gave a speech about reducing the number of women seeking abortions. It was literally met with protests from the pro-life community.”

Hillary Clinton, who theretofore had also been feigning moderation on abortion, quickly followed Obama’s lead and adopted the harsh rhetoric of Planned Parenthood. She thereby drove out of the Democrat Party precisely the numbers of pro-life Catholic, Evangelical and Democrat voters by which she ultimately lost the presidency. Several political commentators have since confirmed this analysis:

A November 9, 2016 press release issued by Democrats For Life Of America asserted that “Hillary Clinton and the Democratic Party decisively lost Tuesday’s election, thanks in large part to the party’s extreme abortion position, which alienated would-be Clinton voters.”

Wear says this catastrophic political blunder was provoked by CBR’s success in sabotaging what was to have Obama’s victory lap at Notre Dame. The new president had never been forced to endure public criticism in the form of bad press. He didn’t like it and he didn’t know how to deal with it. For weeks, each embarrassing article about our protests deepened his anger.

The South Bend Tribune, on April 28, 2009, ran a story headlined “Anti-Obama protesters splash graphic abortion images by plane, truck around South Bend.” It read that “A group opposed to President Barack Obama’s upcoming commencement speech protested high above the Notre Dame campus Tuesday. The group, The Center For Bio-Ethical Reform (CBR), had a … plane circle the campus starting about 5:30 p.m. with a 50-by-100 foot banner of a dead 10-week-old fetus behind it.”

The Los Angeles Times, March 25, 2009, had earlier published a story titled “Obama’s scheduled Notre Dame speech draws criticism.” Referring impliedly to CBR, it reported that Mr. Obama’s use of Notre Dame as a vehicle through which to deceive the Catholic believers (our words, not theirs) regarding abortion resulted in the “triggering [of] protests by national antiabortion groups.” The “national abortion groups” were basically CBR. 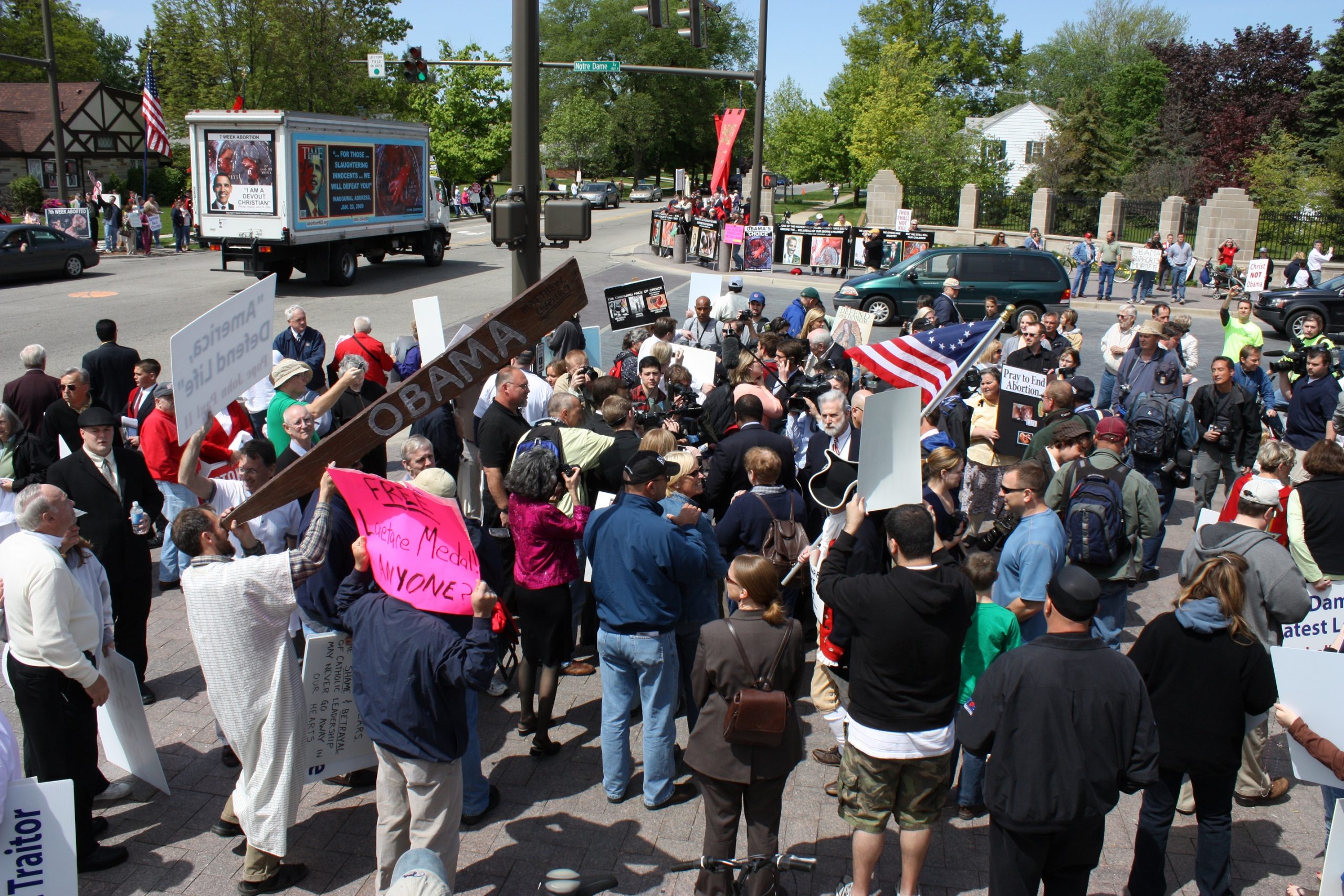 The New York Times, May 18, 2009, published a story headlined “At Notre Dame, Obama Calls for Civil Tone in Abortion Debate.” The article reported that “A plane overhead pulled a banner with a picture of the feet of an aborted fetus.” The article also noted that our protests “were amplified on national airwaves,” and that visitors “approaching campus for the [commencement] ceremony were likewise greeted by photographs of mangled fetuses.” By “civil,” he meant no abortion photos.

NPR (National Public Radio) posted a similar story May 14, 2009, headlined “Obama’s Notre Dame Visit Stirs Passions,” with a photo of a CBR tow plane pulling an aerial billboard above a caption which read “A banner towed by a … plane is seen flying past the Golden Dome and statue of the Virgin Mary at the University of Notre Dame campus in South Bend, Indiana, on April 29. Anti-abortion activists [read CBR] have stepped up such displays in the weeks leading up to President Obama’s planned address on campus Sunday.” The article also referred to “[CBR] Trucks imprinted with similar photos [which] ply the streets of the surrounding City of South Bend.” The last thing Obama wanted regarding abortion was to stir passions.

WND.com, May 6, 2009, headlined “Turbulence Surrounds Notre Dame ‘Abortion Plane.’” The story was described as an “Exclusive” report “… on the success of [an aborted] fetus banner protesting Obama speech.”

The Los Angeles Times, May 18, 2009, headlined a story, “At Notre Dame, Obama tackles abortion debate.” The article reported that “… cargo trucks with pictures of bloodied fetuses circled campus.” Obama didn’t “tackle” the debate; it tackled him.

The Washington Post, “Antiabortion Protesters Converge on Notre Dame Before Obama’s Visit.” Wednesday, May 13, 2009. It reported that “As some students kicked a soccer ball and others stretched out on the bountiful lawns of the University of Notre Dame, the peace of a sunny graduation-week afternoon was broken by the incessant buzz of an airplane engine overhead.” Annoying, eh? “Churning in circles above the slate rooftops and the famous golden statue of the Virgin Mary, a small plane towed a banner depicting the remains of an aborted fetus and the words ‘10 Week Abortion.’”

Then it explained that “The graphic message is directed at President Obama, who will arrive Sunday to a campus that has been jolted by abortion opponents who object to the pro-abortion-rights Democrat delivering a commencement address at the nation’s largest Catholic university.” This is not the sort of coverage the president was accustomed to suffering.

Our initial goal had been to ruin Notre Dame’s graduation ceremony so thoroughly that no other Catholic school would dare to invite Obama to campus. Imagine the bogus legitimacy Obama might have garnered among Catholic voters had he, hypothetically, been the graduation speaker every year for eight straight years at Notre Dame, DePaul, St. John’s, Georgetown, St. Louis, Loyola, Fordham, and Boston College. But by God’s grace, we managed to dissuade every other Catholic university from risking the chaos we created at Notre Dame. Not a single Catholic school ever invited him again.

In fact, the Washington Times, December 5, 2016 (“Notre Dame waffles on Donald Trump invitation after Obama caused ‘circus’”), reported that university president Fr. John Jenkins, when asked by the campus newspaper if he would invite President Trump to deliver a commencement talk, was still so traumatized by CBR’s earlier assault that he admitted “the 2009 Commencement was a bit of a political circus, and I think I’m conscious that that day is for graduates and their parents – and I don’t want to make the focus something else.” “Something else” like dead babies.

Obama finally had enough of this humiliation and essentially said “to h***” with the pro-life community. He and Clinton would try to win with pro-abortion millennials, single women, and minorities. The fallout from this stumble can be easily quantified: In 2008, Obama’s disingenuous courtship of pro-life Democrats was rewarded with 54% of the Catholic vote. By 2012, his stark abandonment of pro-lifers had driven his share of the Catholic vote down to 50%. When 2016 arrived, Clinton’s ill-concealed contempt for pro-life voters left her with only 45% of the Catholic vote. CBR wasn’t responsible for this entire electoral collapse, but Michael Wear, who watched his abortion plan unravel from his office at the White House, says CBR’s Notre Dame protests started it all.